As I walked over the purple carpet of spent jacaranda flowers I thought about the fleeting nature of beauty. Jacaranda trees are a hallmark of Brisbane in spring. They dot the urban landscape with bright purple crowns, like lanterns, and look beautiful against the high blue Queensland sky in October. deciduous as they are, their tiny compound bi-pinnate leaflets turn yellow and drop in winter, before the tree smothers its twigs with trumpet-shaped purple flowers in October that beckon the insects and critters for help with fertilisation. Only then does the bright green foliage return, providing great shade in this sunburnt country that is curiously low on good native shade trees. Once spent, the flowers fall, like droplets of purple rain, and are then followed by round, flat woody seed pods, about 5 cm in diameter, from which flat, winged seeds float when they open, ready to generate new trees. 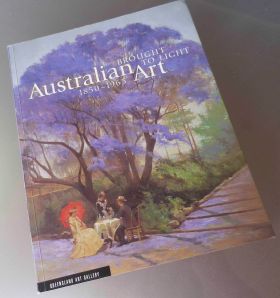 R. Godfrey Rivers’ Under the jacaranda from 1903 was purchased by Queensland Art Gallery – Godfrey Rivers was instrumental in establishing the Queensland National Art Gallery in Brisbane in 1895 and his painting features on the cover of the Gallery’s publication about its survey of Australian Art from 1850 to 1965 shown n 1998.

Jacaranda trees are prolific in Brisbane and important to the Brisbane identity. But the jacaranda is not native to Brisbane or even to Australia. It is an invasive species that easily germinates near our rivers and creeks, crowding out more fragile native species. Jacaranda is listed as a ‘low priority pest species’ in the Brisbane Weed Management Plan 2013-17 and as an ‘invasive naturalised species’ in a paper published by the Department of Agriculture, Fisheries and Foresty. The very first jacaranda was brought in deliberately from Brazil and planted in Brisbane’s Botanical Gardens near Parliament House in 1864. It is the very same tree that Godfrey Rivers immortalised in his painting Under the Jacaranda in 1903 that was acquired by the Queensland Art Gallery. I love this painting of the artist and his wife taking tea underneath the shade of the giant purple crown with her bright red parasol shining like an illuminated button. Later destroyed by a storm, this tree is thought to be the mother of all jacarandas in Australia and so lives on in its seedling trees.

Jacarandas dot the Brisbane suburban landscape when it is time to study for end of year exams. Photo: Mick 2014

It is easy to see why the jacaranda has become a much-loved – and beautiful – symbol of Brisbane. When I was an overseas student in 1990, one university lecturer said to me that if you haven’t started studying when the jacarandas flower, you are likely to fail your exams. This was good advice for someone who was wondering how you knew spring from summer and autumn from winter in this great southern land.

One of the things I miss about Denmark is the dramatic transition of the seasons. From winter’s sometimes white, but mostly just wet, cold sparse landscape to spring’s affirmation of fresh new life and bright colourful flowers from bulbs awoken by the warmer weather. From the pale green foliage of spring to summer’s dark green crowns teeming with life, insects humming and blackbirds singing for their growing children, when even the dead of the night fails to eradicate the light of the sun entirely. From the holiday sun tan of summer to autumn’s golden fields and heavy fruit trees, ready for harvesting under the blue sky of September, before the cold and rain set in, ready for winter. These seasons are all beautiful in their own way – and the regularity of their passing is so different from the way Australian seasons seem tied more closely to the randomness of drought and wet.

From winter’s white over early spring’s budding green life to late spring’s bright green leaves on a birch tree in my back yard in Aalborg. Photo: Lone 1991.

Next year in Copenhagen, I will experience the cycle of the northern European seasons again, for the first time since 1989. I look forward to that, though when October comes around, I might just find myself missing the beauty of the jacaranda blue and the mild weather of spring.

Suddenly, the wind came from the west and brought interior cold gusts with it. Wind from the bare outback, the great big red centre of nothing, but a large rock and a few, very small communities, each 100 km from nothing. Sometimes this wind brings red dust with it, but today the wind seems to only bring cold. Last week Brisbane had temperatures up to 30 degrees and unseasonal rain that caught us by surprise, but on Saturday morning it suddenly changed. Like nature realised with a jolt that it was winter.