Enough to scare the witches on their broomsticks. Photo: Mick. 2015.

When politicians talk about preservation of Danishness, I often wonder exactly what they mean. Perhaps Danishness is most clearly expressed through the traditional celebrations. The Danes do love a good celebration. At one point the calendar had so many holy days to celebrate that a whole host of them had to be combined into just one holiday, Store Bededag or Great Prayers Day. Far from all Danish celebrations are of the religious kind. Many, including those appropriated by Christendom, have their genesis in pre-Christian traditions and beliefs.

Just like all Danish celebrations, Sankt Hans Aften is celebrated with coming together around food, drink and song, with fire added to the mix.

Tivoli burnt its own fire before the Tivoli Illuminations on the lake. Photo: Mick. 2015.

When Denmark was a non-Christian farming community, the superstition of the day was that at midsummer good and evil powers were especially strong. Good powers might be found in springs or trees and people with ailments would pilgrimage to such places of healing at midsummer. Healing herbs collected on Sankt Hans Aften were thought to be particularly effectual.

Fire was thought to expel evil. Solstice was known as a time when witches would fly on their broomsticks to gather in Blocksbjerg in Harzen, Germany or by the volcano Hekla, Iceland – from this comes the Danish saying ‘ad Hekkenfeldt til’ which is loosely translated to ‘go to hell’. Not nice places really and clearly people who gather there must be kept at bay. By burning a fire, one could prevent witches flying over from stopping for a rest in the neighbourhood. Later, after wise women were burnt at the stake for witchcraft in the name of Christianity, it became custom to add a witch doll to the bonfire on Sankt Hans Aften. While the witch shape went up into smoke, the crowd would merrily gather around the fire and sing about how much we love our country.

In my childhood my family used to gather at my aunt and uncle’s farm in Southern Jutland. The bonfire was created from wooden debris from the fields and old timber from the farm stacked around large hay bales that easily took to fire. Around the blazing heat, we would sing Drachman’s ‘Midsommervisen‘, the old traditional version. Together with my cousins and siblings, I would find sticks and skewer long sausages to toast them over the fire. We would get so close the fire that our cheeks started burning and the odd eyebrow and hair cut would be singed. The blackened sausage would be devoured with lashings of tomato ketchup.

I always felt a deep sadness for the witch doll – why should she burn on the fire? Then my uncle would add  ‘Heksehyl’ (Witch Screams) to the fire – a kind of fireworks that when ignited emits a loud whistle, emulating a witch screaming. I could not help feeling both terrified and delighted. 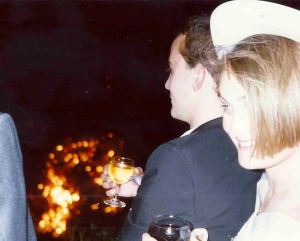 Our marriage was blessed by Sankt Hans bonfire.

After food and drink and the fire had died down to a smouldering, we would get back in the car and go home with the embers of the fire still burning on my retina when I closed my eyes and fell asleep, full from hygge, togetherness and the experience.

My darling man and I married at solstice. In the Danish tradition of writing personalised songs to suit the happy occasion, my dear childhood friends had written a song precisely on the melody of Midsommervisen, though we sang it on the far more rhythmical version by pop band Shu-bi-dua. My cousins built a Sankt Hans fire for the party and we sang the traditional song and held evil at bay. There have been very few witches in my marriage, so maybe it worked?

Just like most Danish traditions, Sankt Hans Aften is not uniquely Danish. Over the years, customs have been influenced by traditions brought to Denmark from elsewhere. There is no equivalent in Australian tradition, not only because of the fact that in the southern hemisphere summer solstice is at x-mas and so may be overpowered by that other tradition appropriated by Christendom. Also, the ever present bushfire danger make Australians shake their head in disbelief at the Danish affinity with fire, be it candle light on the window sill, live candles on the x-mas tree or the Sankt Hans bonfire.

Last night’s experience in Copenhagen was no less magical than the Sankt Hans experiences I recall, complete with food, drink, songs and fire, even if the cow pats in the fields and the smell of singed hair were missing. We started at Islands Brygge on the canal front, weaved our way back to Nørrebro through Tivoli, saw the fire on the Lake at Dronning Louises Bro and joined the crowd at Blaagaardsplads around the smouldering fire. I noticed the diversity of people who had come out on this fine evening – from many ethnic origins other than Danish – to take part in this Danish tradition. Not just the African and Roma bottle collectors, who scrape a living out of the Danish love of combining the outdoors with beer. All types of people picnicked on the waterfront, danced to the music and joined in the Danish festivities. No doubt, they too will influence the ongoing tradition of Sankt Hans Aften. Rather than threaten Danishness, diversity has the ability to make our traditions stronger and more relevant to today’s world. I think that is worth celebrating.

Another Sankt Hans fire has burnt down on Blaagaardsplads on Nørrebro. Photo: Mick. 2015.