The bright red of the flame tree is just starting to come out. This shapely shade tree hails from Madagascar originally. Photo: Mick 2014.

Last week I wrote about the jacaranda in Brisbane. Thinking about, noticing and writing about the dots of purple so iconic in Brisbane, helped me also notice the other shapes and colours that make up our local suburban landscape.

Each morning Mick and I walk for an hour. This Saturday morning, we brought our cameras along to document what we see here in the early November landscape of Mitchelton. It turns out the jacaranda is far from the only imported species that colours our suburb. Our suburban vegetation is a colourful blend of species from all over the world, just like our population is a fantastic mix of cultural backgrounds.

I hope you enjoy it as much as we do.

Just starting to bloom, the frangipani flowers add amazing vibrancy and fragrance to the street scape. The frangipani comes from Central America but is ubiquitous to the Brisbane landscape. Photo: Mick 2014. 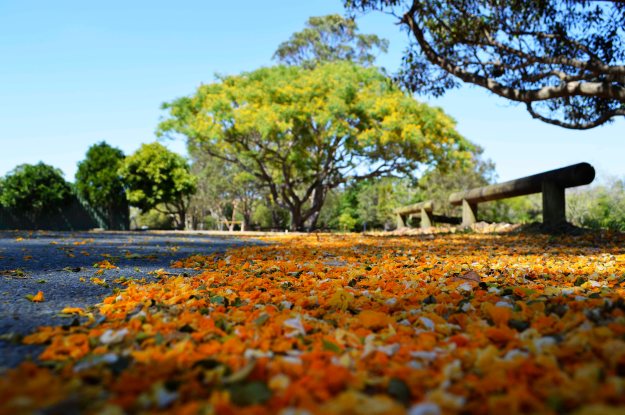 Spent flowers of Pride of Bolivia create a colourful carpet on the path. It is a weed tree in Brisbane. Photo: Mick 2014.

The dry helps this magnolia look its best. The magnolia species is thought to be about 95 million years old, native to both east Asia and the Americas. Photo: Mick 2014.